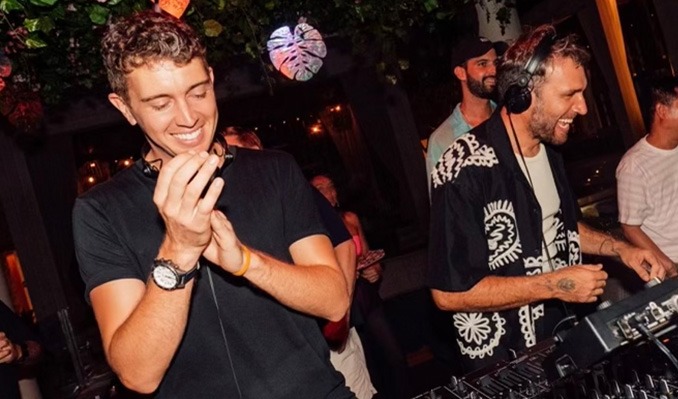 Give the people what they want.

Having scaled the heights of sell-out orchestral headline shows, ARIA awards and international festival stages, Flight Facilities are going back to what it’s all really about; the songs. In 2018, fans can can expect a renaissance of the band’s beloved singles run, a format that seems as much a return to form as a new chapter for Sydney duo Jimmy Lyell and Hugo Gruzman.

“We’re at what feels like a real turning point in our career, says Lyell. “Our lives as individuals are changing and so too is our vision for the band.” It’s this vision which has already seen the release of two breakaway singles that have pushed at the edges of the band’s sound. Most recently, ‘Stranded’ pulled together a diverse range of artists, from concert pianist Piers Lane to Warpaint drummer Stella Mozgawa and previous collaborator, Reggie Watts.

In a brave new world where chart-toppers are increasingly defined algorithmically and playlists are king, Flight Facilities have made an art form out of reinvention. The pair has spent the majority of their careers bucking trends in electronic music, consistently and reliably favouring the timelessness of a well-crafted song. Having racked up over half a billion streams globally, it’s clearly an approach that works.

This attitude has turned some of Flight Facilities’ more unlikely singles into their biggest hits, like the shimmering disco of ‘Foreign Language’ or the symphonic ‘Clair De Lune’. “I’ve always grappled with people saying ‘That’s such a Flight Facilities song’. What the fuck does that mean? I have no idea what we sound like,” laughs Gruzman.

Flight Facilities’ extensive remix catalogue, both for other artists (Miike Snow, Bag Raiders and Cut Copy, to name but a few) and of their own material (Snakehips, Lido, Joe Goddard) also continues to showcase the breadth of their influence. They’re certainly not a band to be defined by format.

A slew of new singles allows this relentlessly creative duo more chances to challenge their own expectations, something which forms the basis of how they operate. “Jimmy gets frustrated because I always look for a thousand possibilities on a sound,” says Gruzman. “Even if we find one straight away that’s good, I’ll keep going. Every ‘No’ counts as a ‘Yes’, because you’re eliminating those possibilities. I hate wondering.”

The turn back to singles also offers more room to collaborate with the emerging and legendary voices that have come to mark the band’s aesthetic. From Emma Louise to Broods, Kylie and Katie Noonan, Flight Facilities have a knack for picking vocalists that feel more like friends than features. Expect some instrumental numbers too, returning to the wide-eyed naivety that first brought the two together. Or as Jimmy puts it: “We want to make a statement one day and write a pop song the next.”

These are uncertain times but one thing is assured; Flight Facilities have plenty more gas in the tank. The only question now is which direction they go next. You’ve heard the band drop singles before, but never quite as excitedly as this. “Being able to laugh at yourself is the most important thing,” says Gruzman “If you believe in yourself to do the more important pieces, you should have the integrity to also go out and do something fun and stupid.”

More InfoFacebookOfficial WebsiteTwitter
*Service and handling fees are added to the price of each ticket.
Buy Tickets